Photos and videos from guests & staff for January to July 2015 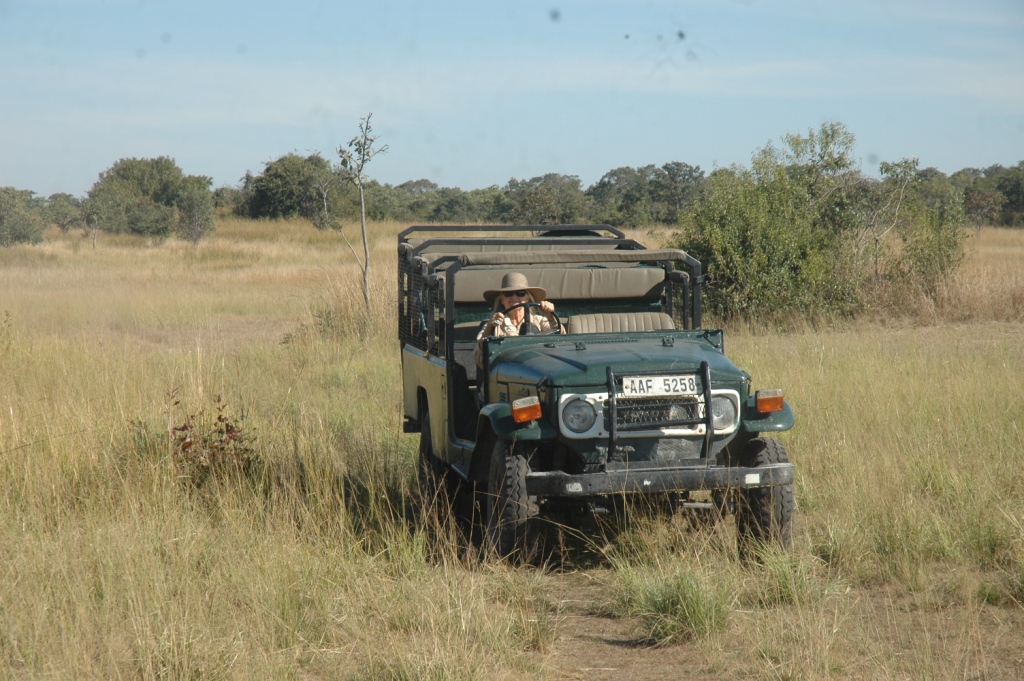 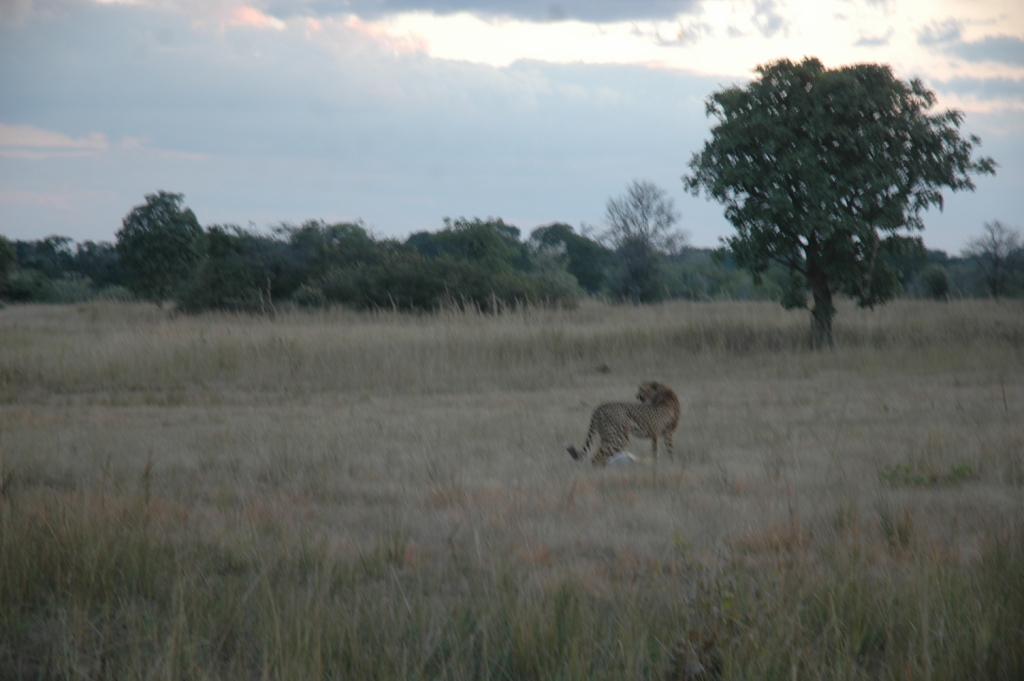 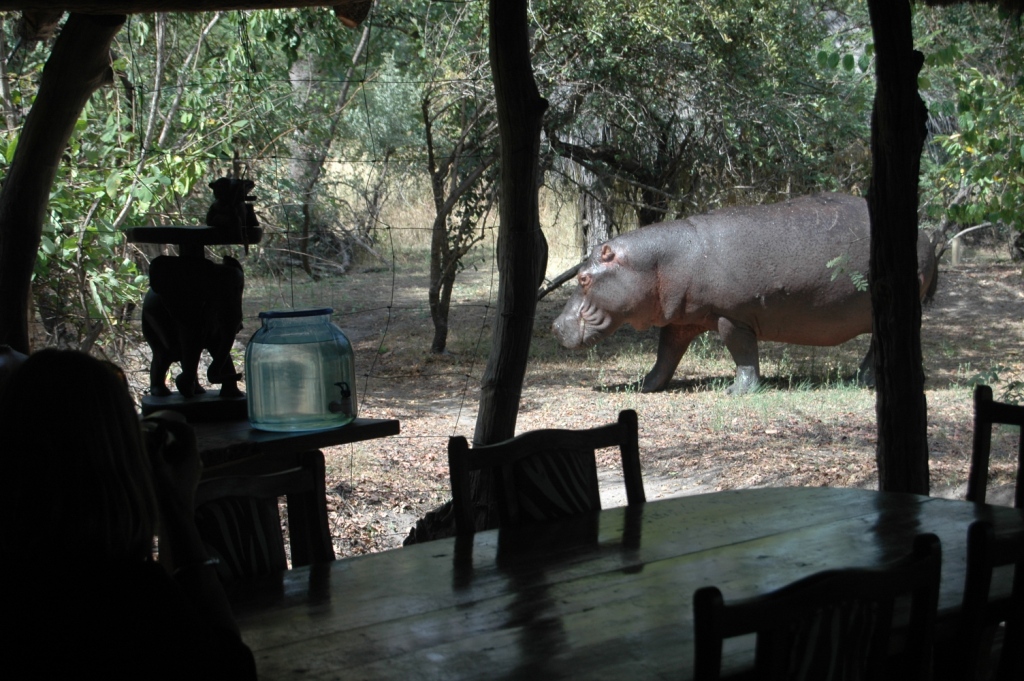 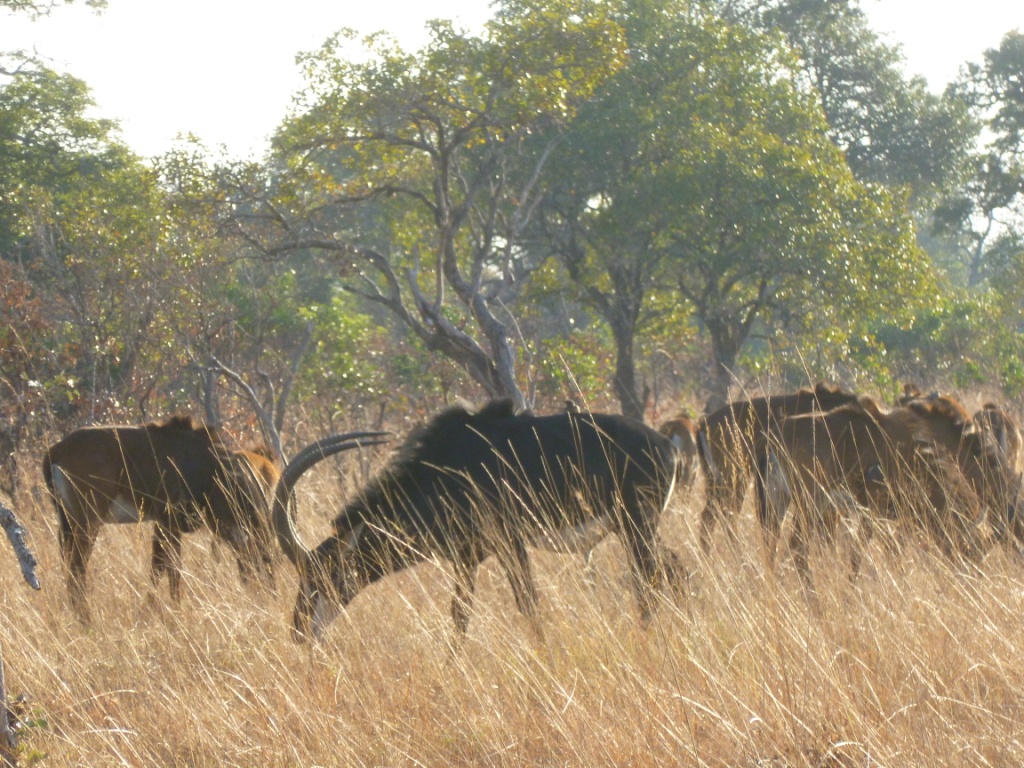 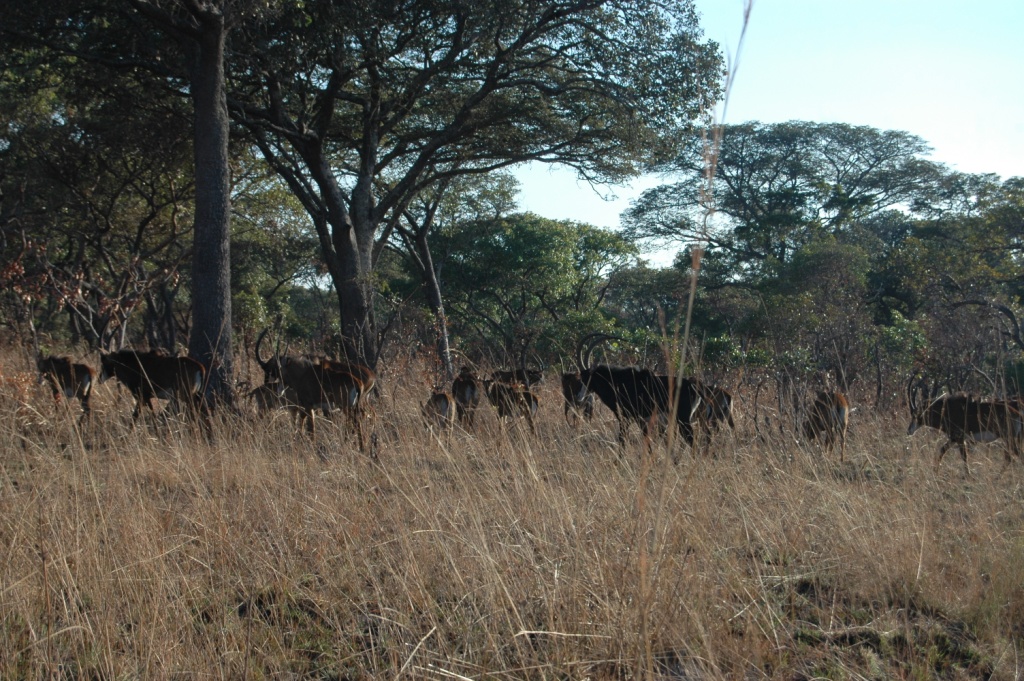 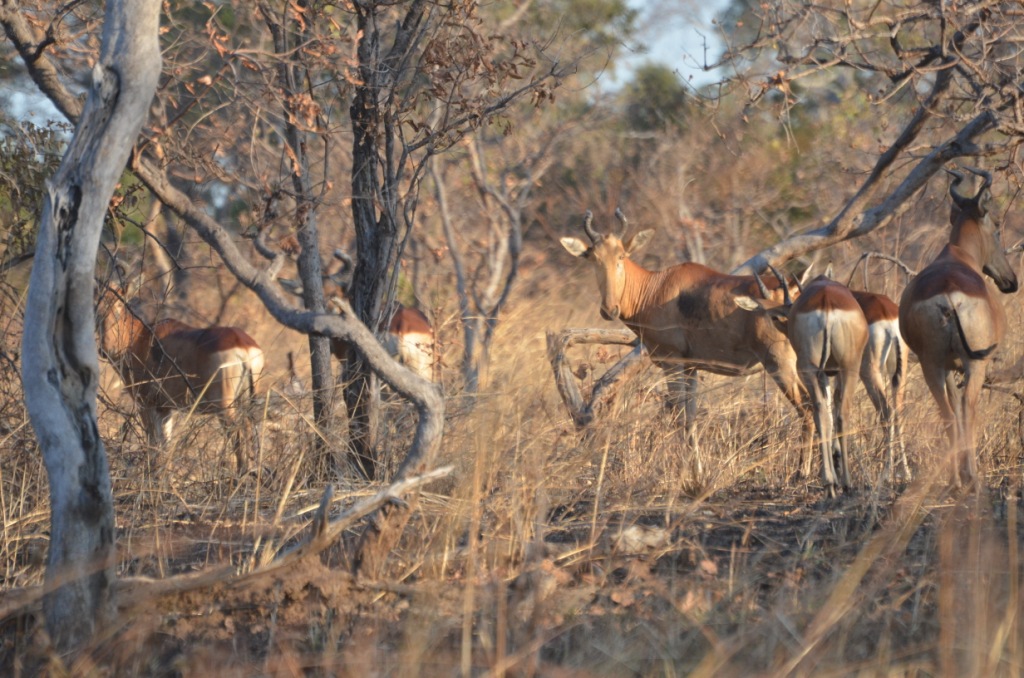 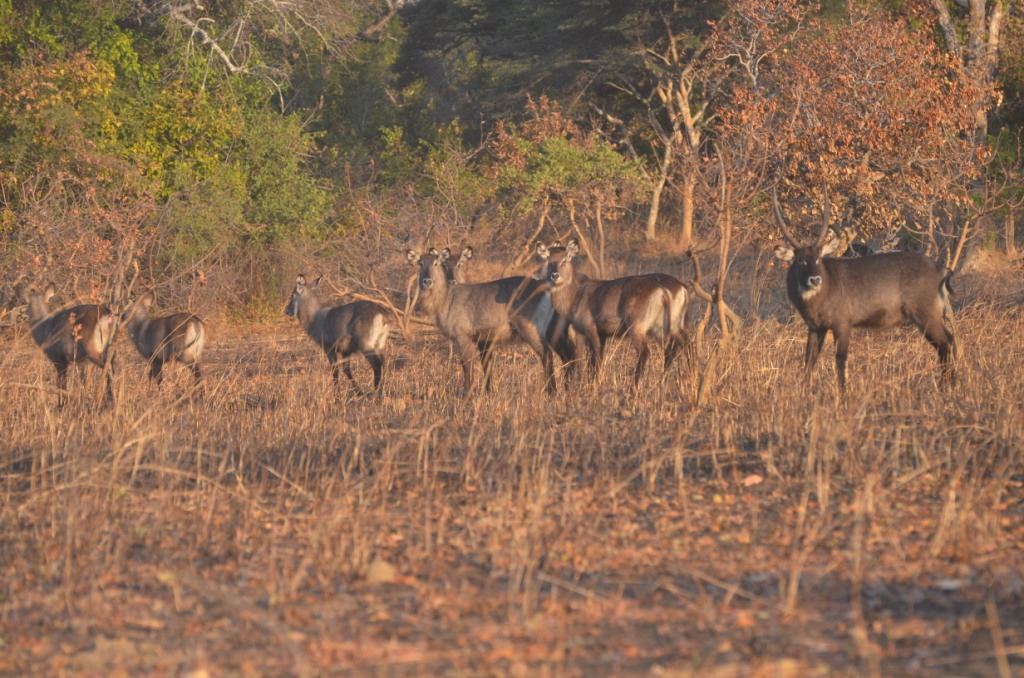 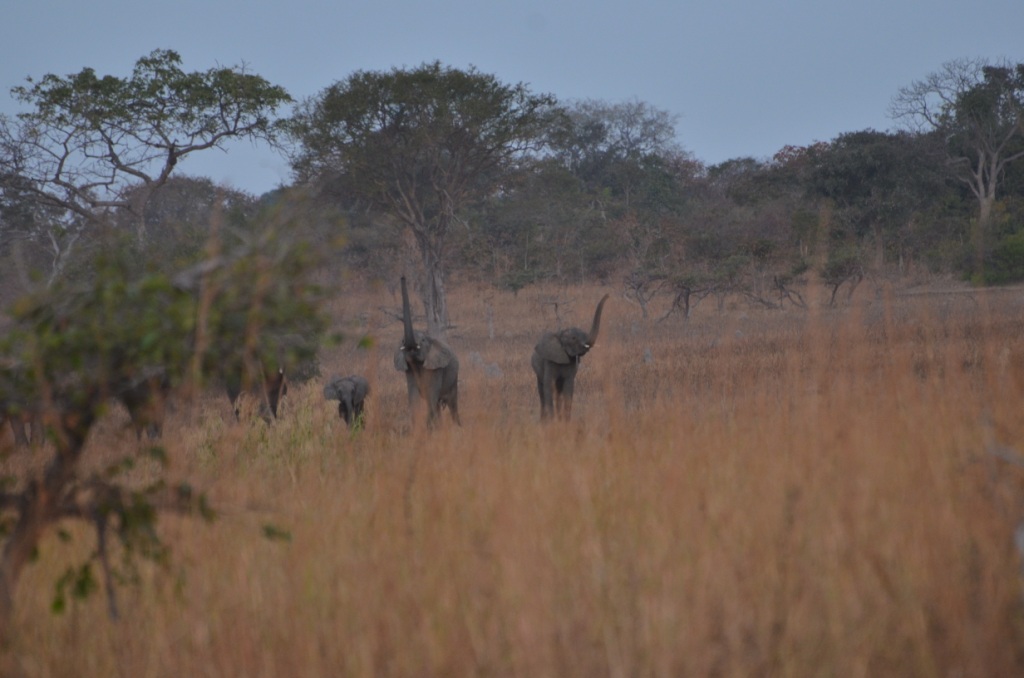 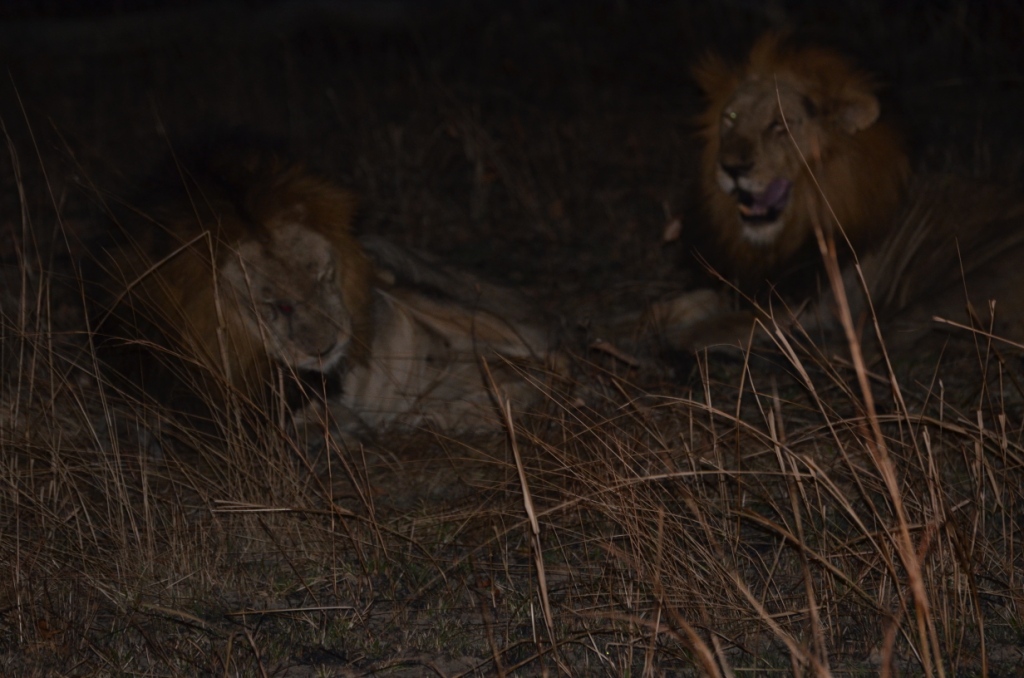 A Close Encouter of the Lionine Kind – Logs by Tim Rayner

It was a clear day. Our party landed north of  Island 1 and headed inland looking for lions.  Tracker Mike soon found the trail: a smattering  of pawprints in the chalky dust around the base  of an anthill. Large prints. We followed the  prints westwards, carving an arc back around  towards the river. Soon we saw vultures – at  least 10 of them, lazily spiraling around a  cluster of candelabra trees. Stealing towards  them, we were confronted by a grisly sight: the  carcasses of a female buffalo and her calf,  both literally reduced to skin and bones, all  meat and organs stripped from their frames.

Lion prints were everywhere. We followed them  back along the river, sliding like ghosts  beneath the trees. I had my camera set to  video, convinced that we would be set upon at  any moment. But, 200 meters from the boat, we  still had not found them. When we paused to  identify a bird in the branches overhead, I  sensed that we were losing hope. I thrummed  with frustration. Where were those big cats?

At this moment, I noticed a yellow log in the  clearing ahead. ‘What is that?’ I muttered.  Just why I found the log interesting is hard to  say. Perhaps on some level I processed that  logs did not come in quite that shade of yellow  in Zambia. Or perhaps it was the broken branch  that it extended to the sun, which looked  curiously like a paw. Then the log rolled over.  ‘Lion, lion, lion!’ I hissed. On cue, a  beautiful young adult male lion burst into the  air not twenty meters away, and the clearing  erupted into life.

Everything happened fast. Mike was stumbling  back, raising his rifle. I was fumbling with my  camera, trying to bring the video back to life.  I barely glimpsed the three females lions who  had been lounging in the sun as they took to  their feet and evaporated into the bush. My  only clear recollection is of the young male  dancing sidewards away from us, shielding the  females in his flank. His gutteral roar split  the air as he disappeared behind an anthill.

I was half hoping that he’d reappear on the  other side of the anthill and challenge us. But  the lions had better things to do. They were  gone. Shaken and elated, we hurried back to the  boat. I had missed my chance to film a lion on  foot, but I had a story for the campfire and a  recollection that will last forever. 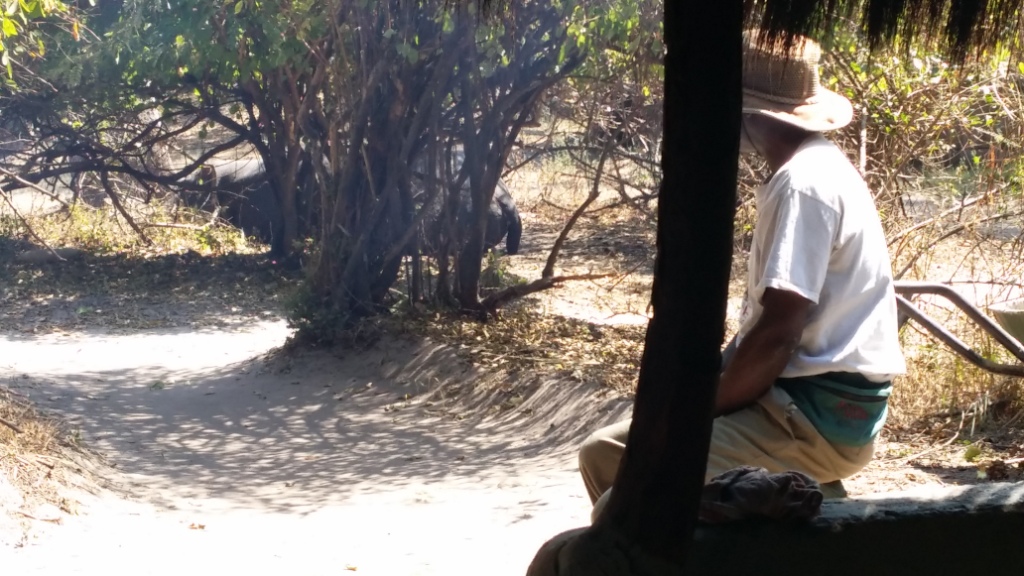 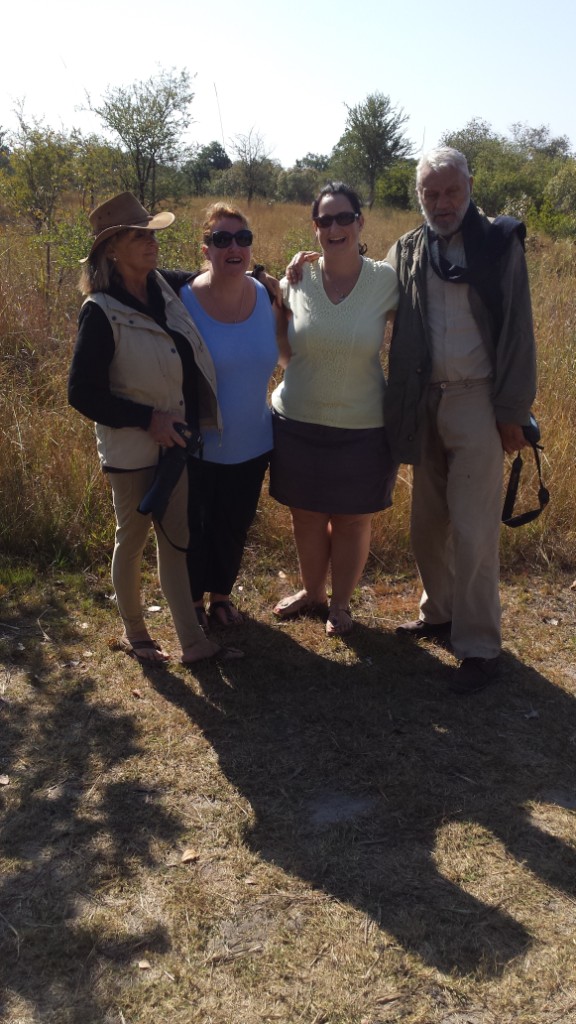 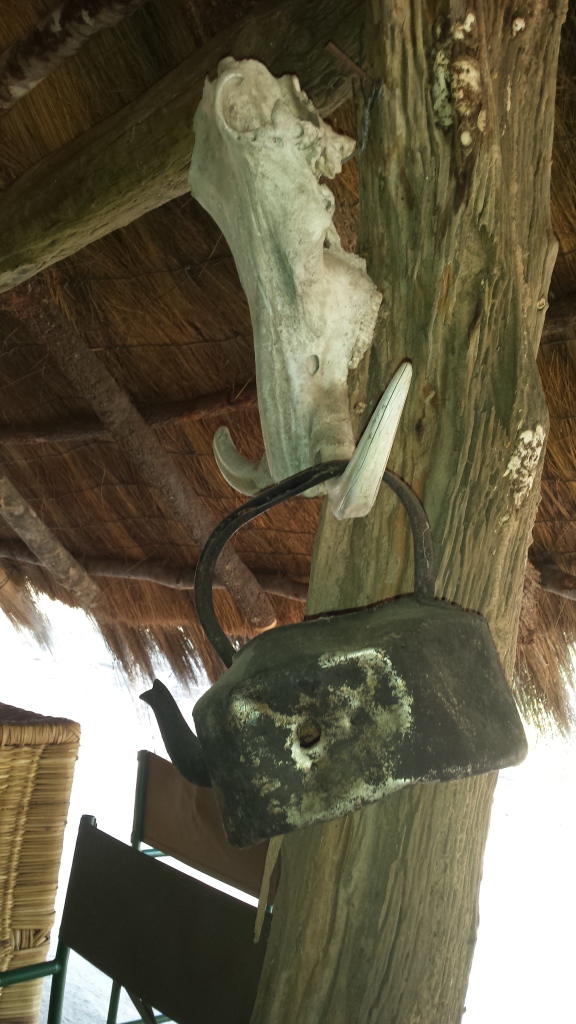 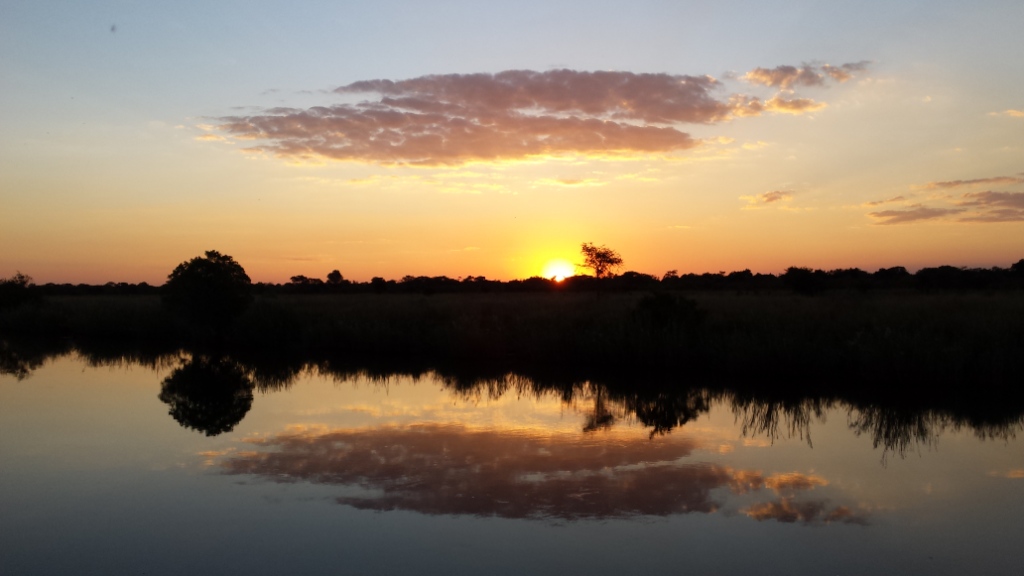 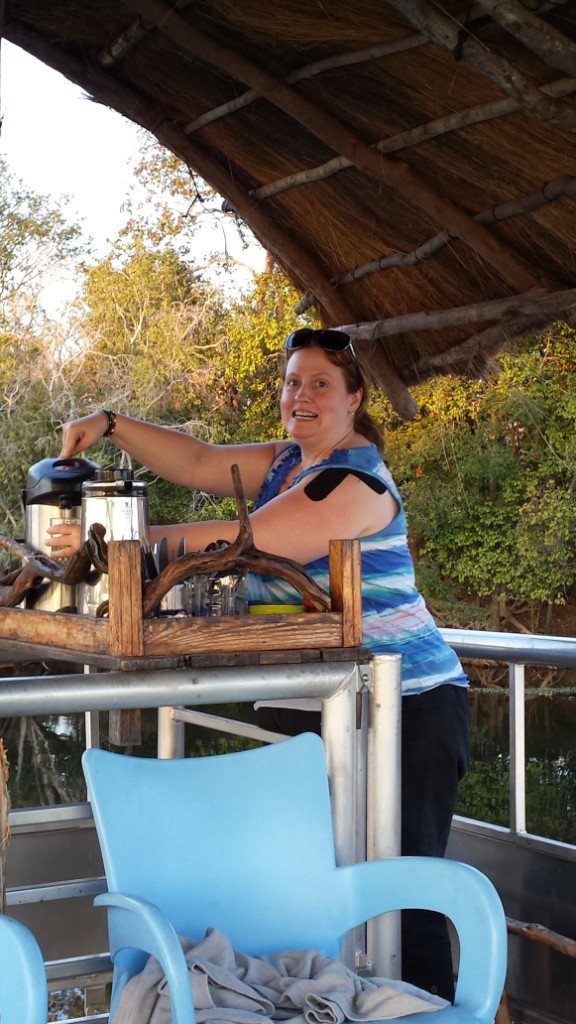 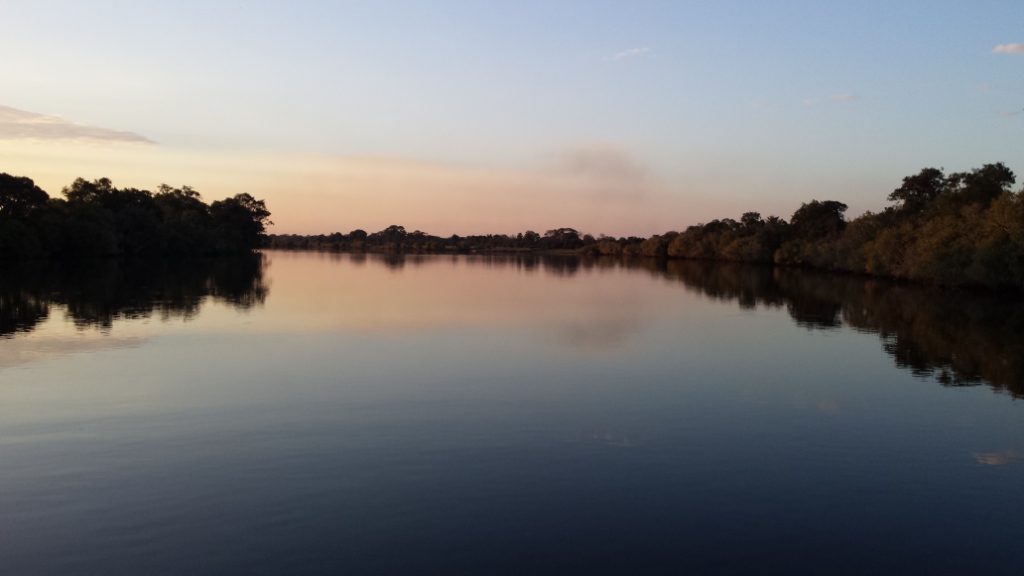 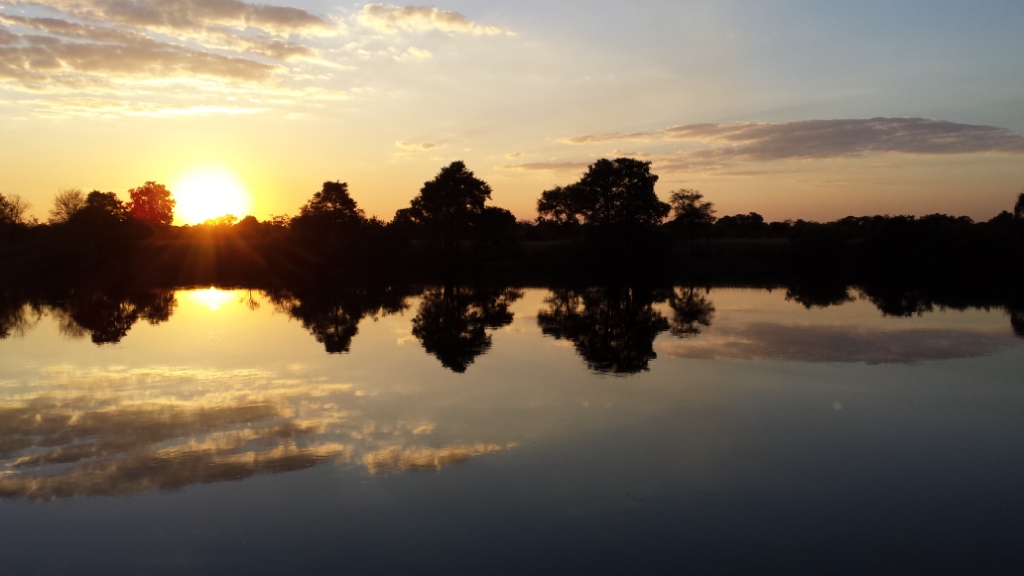 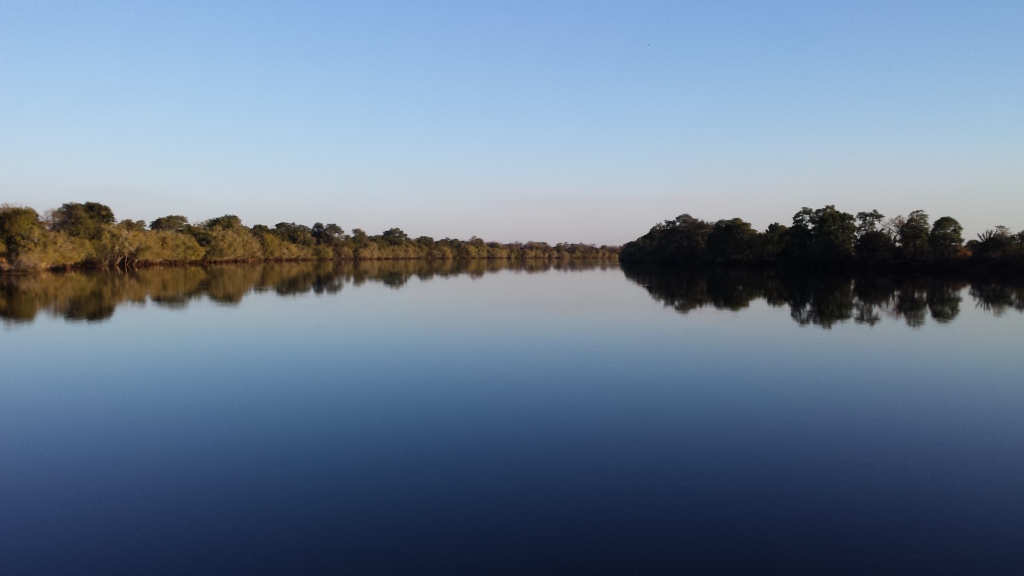 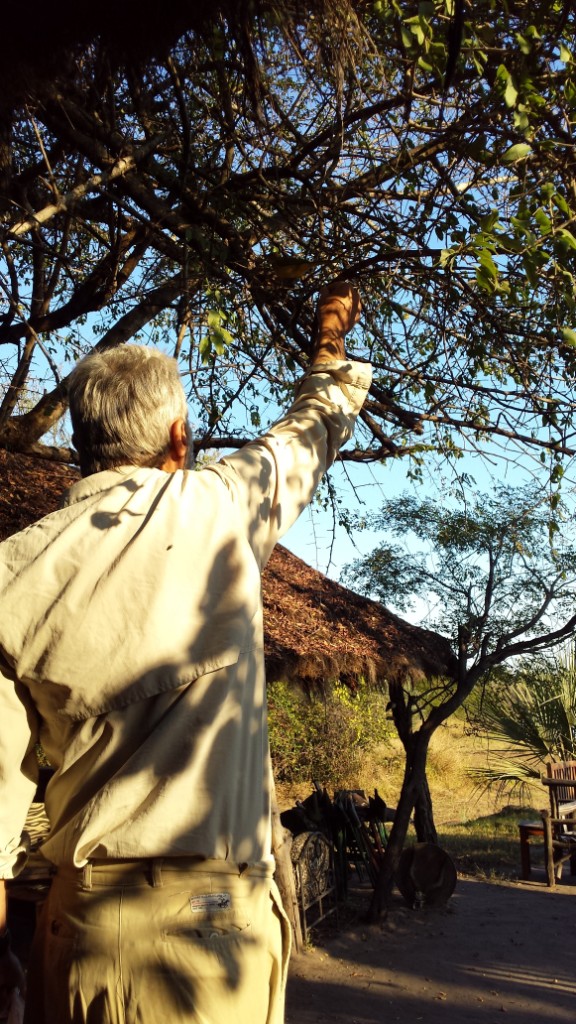 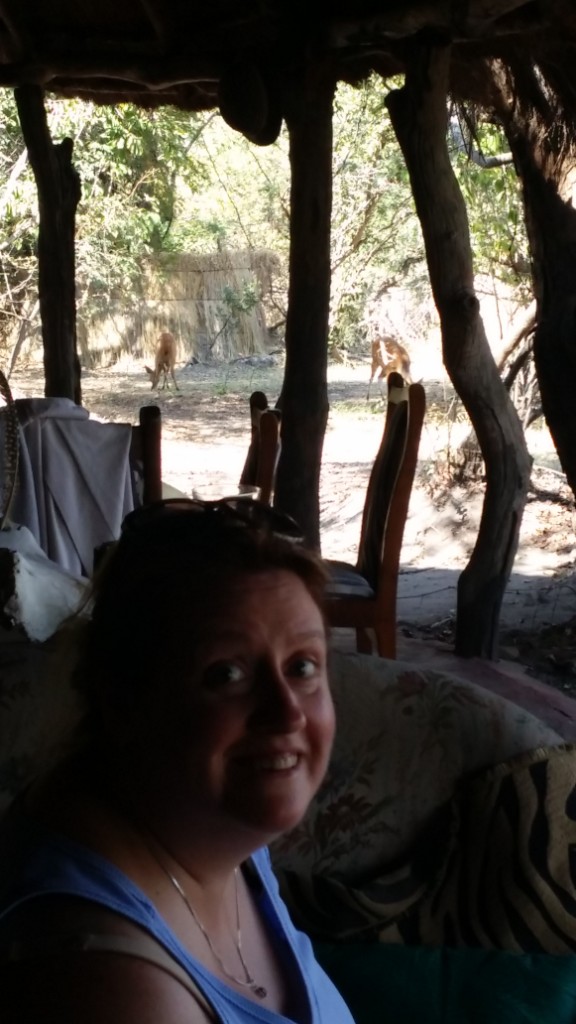 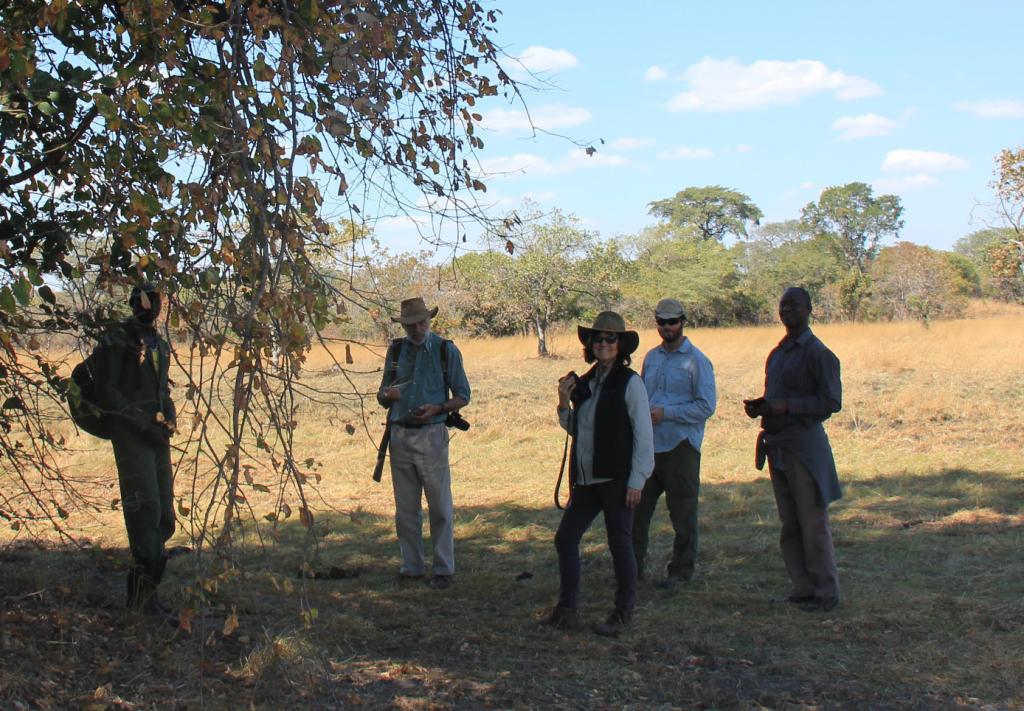 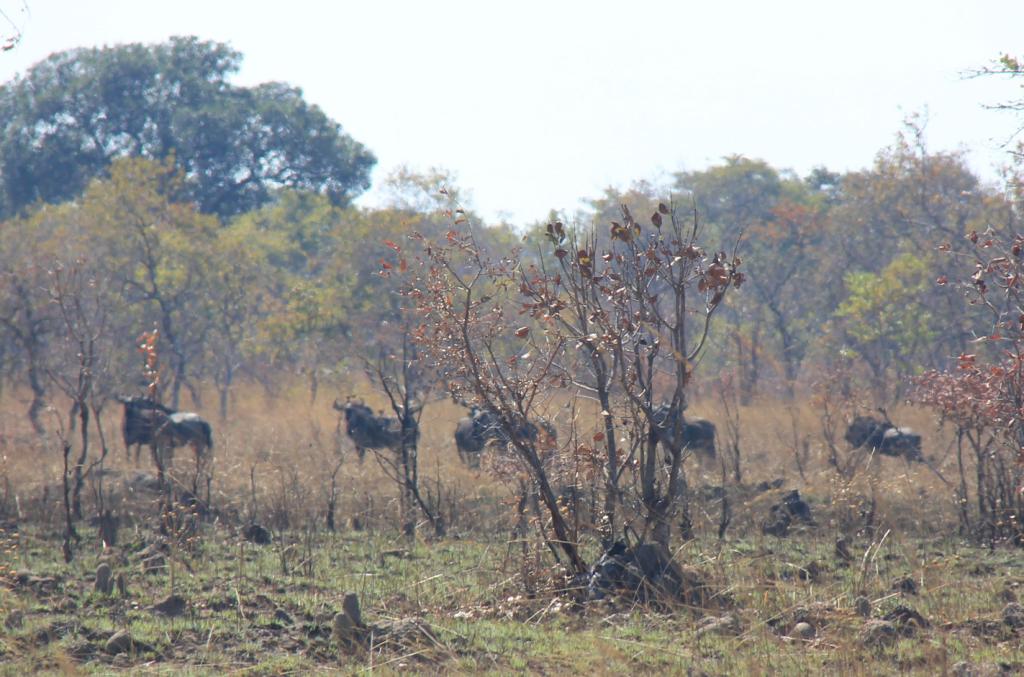 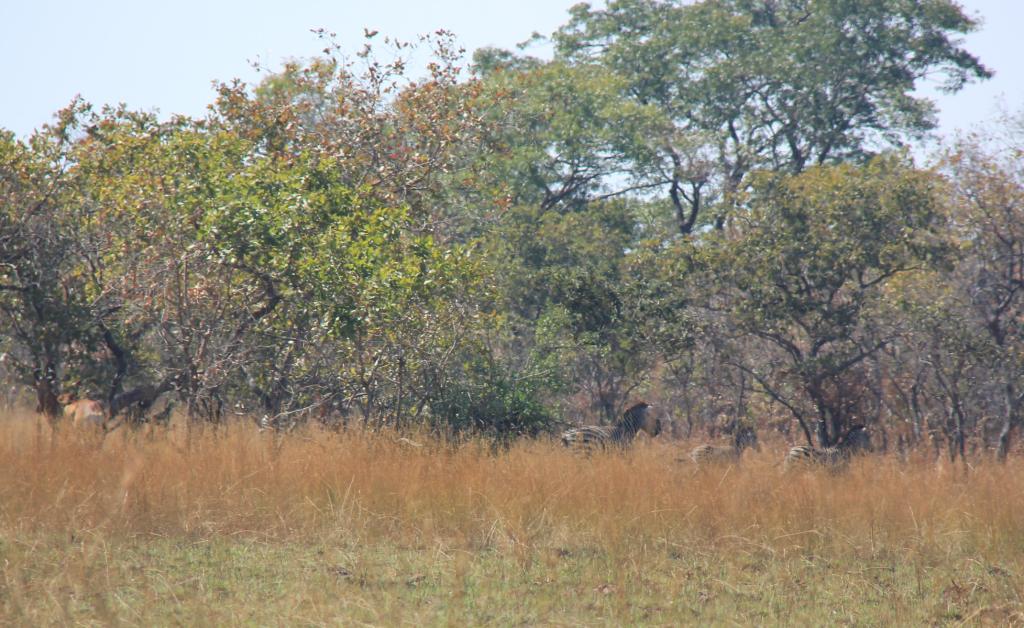 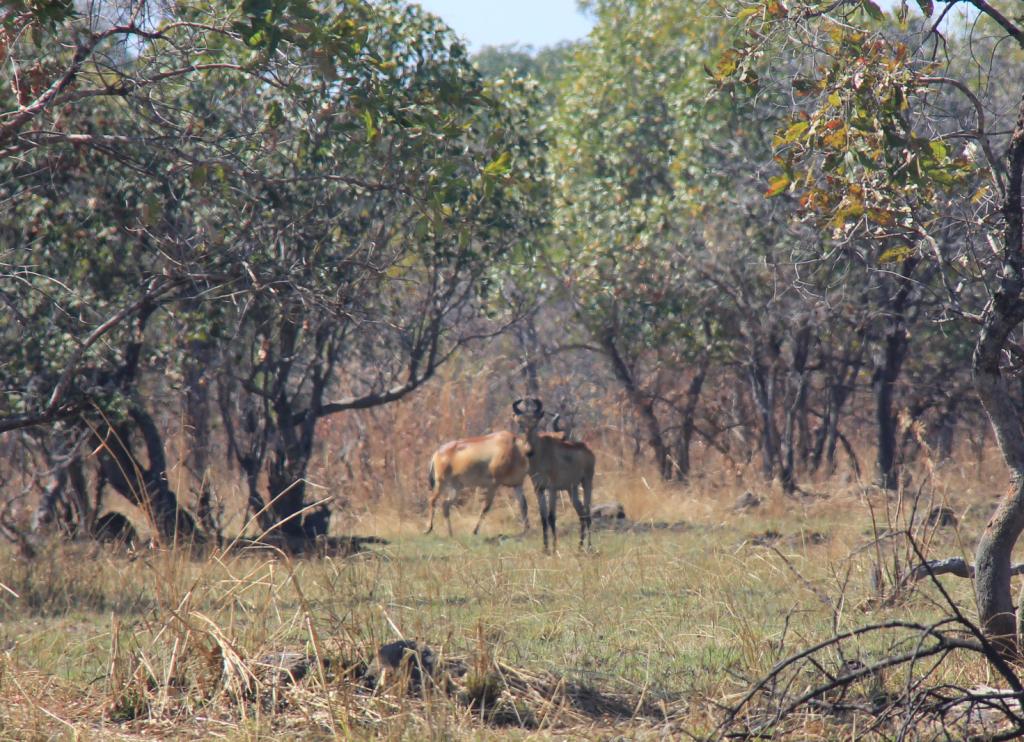 Logs by an Australian scientist.

After a quiet night in our tents at the beautiful Fly Camp, we consumed an early breakfast of mealy meal porridge, fruit, eggs and toast, and headed off at about 9.40, the sun already hot. We soon left the well-trodden trail behind, and there were no track markers of any kind!! We were confident that Moses would safely find the way, but Chris also had a hand-held GPS, and every now and then would correct the direction we were walking. The distance between camps is 8 km, in a northeasterly direction, and would normally take about 3 hours, but we ended up at just short of four and a half hours, not because of losing our way, but because of the large number of groups of wildlife we encountered. It was an unexpected and rare treat!

We didn’t see any animals for the first 3 km, just the occasional holes dug by aardvarks, corms that the bushpigs grub for, and the quartz gravel and duricrust outcrops. Chris suggested stopping for a drink and rest at a waterhole, but when he checked the GPS we had passed it, so settled for the shade of a tree in the middle of a big burnt patch. Chris says the game wardens light the fires, and the fresh grass attracts the wildlife. Well…he was right. As soon as we set off again, we spotted animals on the edge of the open patch, in amongst the trees. Zebra and big red hartebeest, as well as the ubiquitous impala and puku. A group of warthogs came into view, behind the antelope. As we crossed the cracking clay plain, the spoor of many animals formed a palimpsest on the surface: huge round depressions made by elephant; the horseshoe shape of zebra hooves; the double points of impala; the round split pads of buffalo feet, amongst others. A little further on, we saw more zebra and hartebeest, and a small antelope called oribi. We walked towards them so we could take some photographs, and they took off soon after but we were close enough to get some good images. We walked on over the grassy plain towards a big tree on a termite mound that we thought would give us some camouflage, but the animals had gone. It turned out to be a tree consumed by a strangler fig, with its foliage festooned with the nests of weaver birds – many tens of them – looking like lanterns swaying in the breeze. Magic!! There was fresh buffalo dung all around in the shade of the tree.

We came across the skeleton of a hippo in a grove of trees. All the bones were spread around a bit but we managed to find both halves of the skull and put it back together for some photos. What a huge animal, yet it was likely only a juvenile, according to Chris.

Moving beyond the trees, a group of animals was spotted that turned out to be wildebeest!! About 10 of them. They let us get some photos before moving off. What a treat!!

Time was getting on so we picked up the pace a bit and made a more direct line for the base camp. As we neared the river, we encountered more warthogs, only a few meters ahead of us. They took off in a hurry, their tales straight up in the air. On the edge of the miombo forest was a group of four buffalo. We skirted around them and continued on our way, and finally made it to the river, but not before coming upon a pair of kudu who took off in a cloud of dust, and a troupe of monkeys clustered on a termite mound.

By then we were all hot and bothered and very glad to see the river, and the boat heading across to pick us up. All in all, a great walk, with so many different animals – ten different species, and many many individuals. We knew we had experienced something really special. 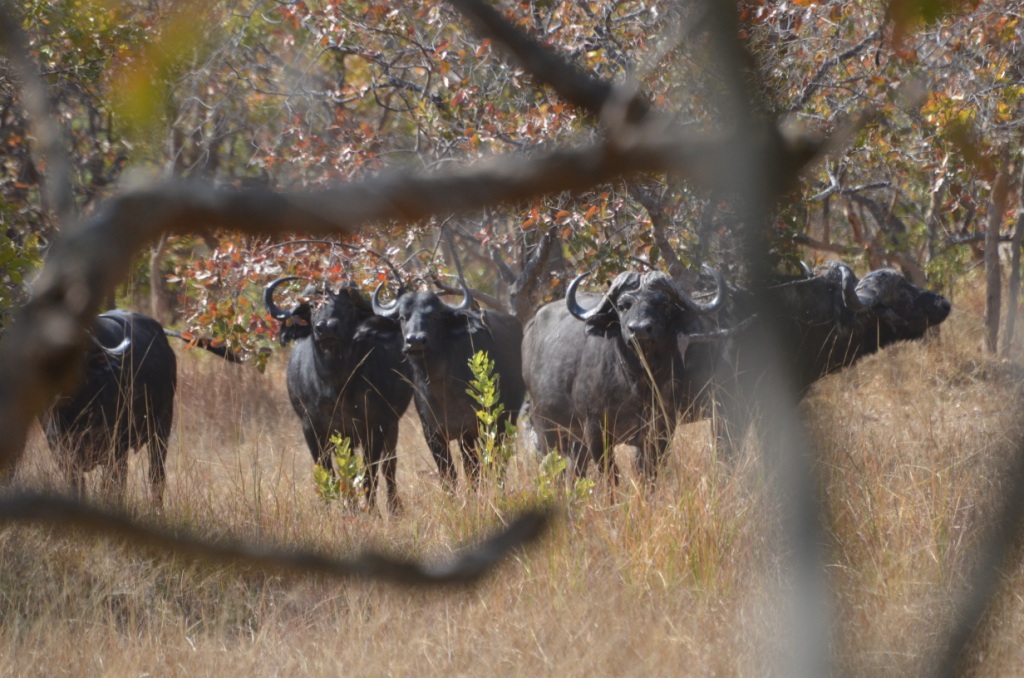 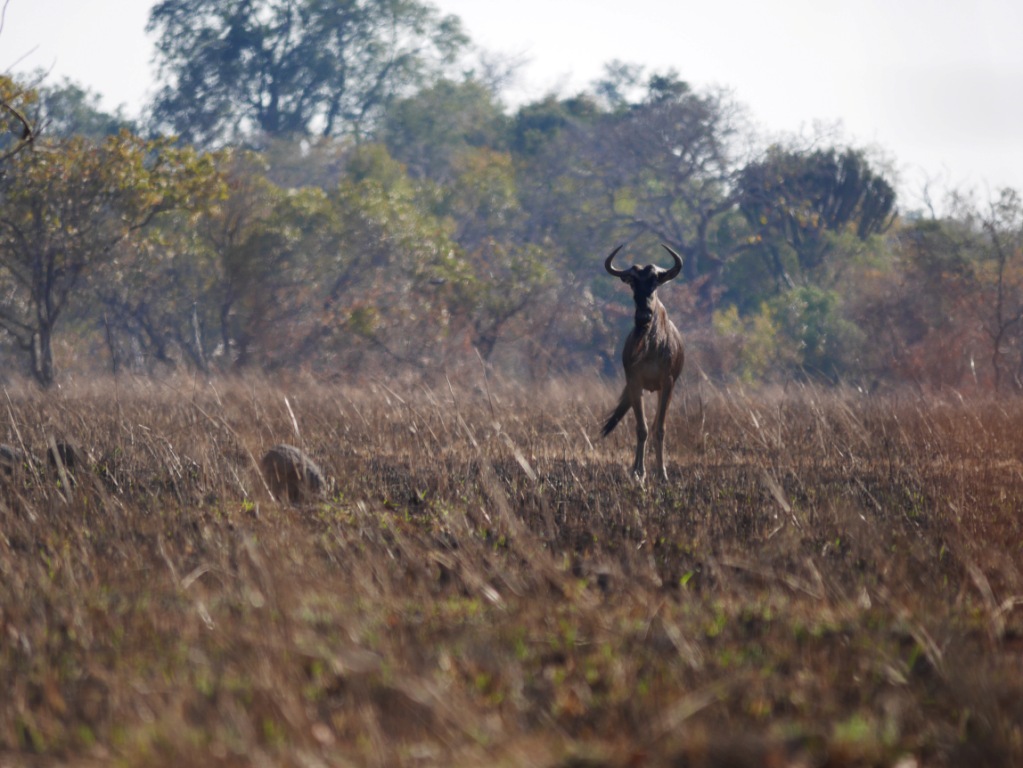