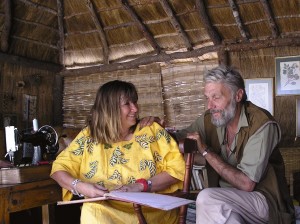 Chris McBride is an avid student of wildlife and has lived in Timbavati and other areas of the African bush since he was a child. (Full CV)

Charlotte has also spent much of her life in the bush , especially during her childhood, where she lived with her parents in the wilds of Zambia. She has many years of experience in running game lodges and will make you feel at home. 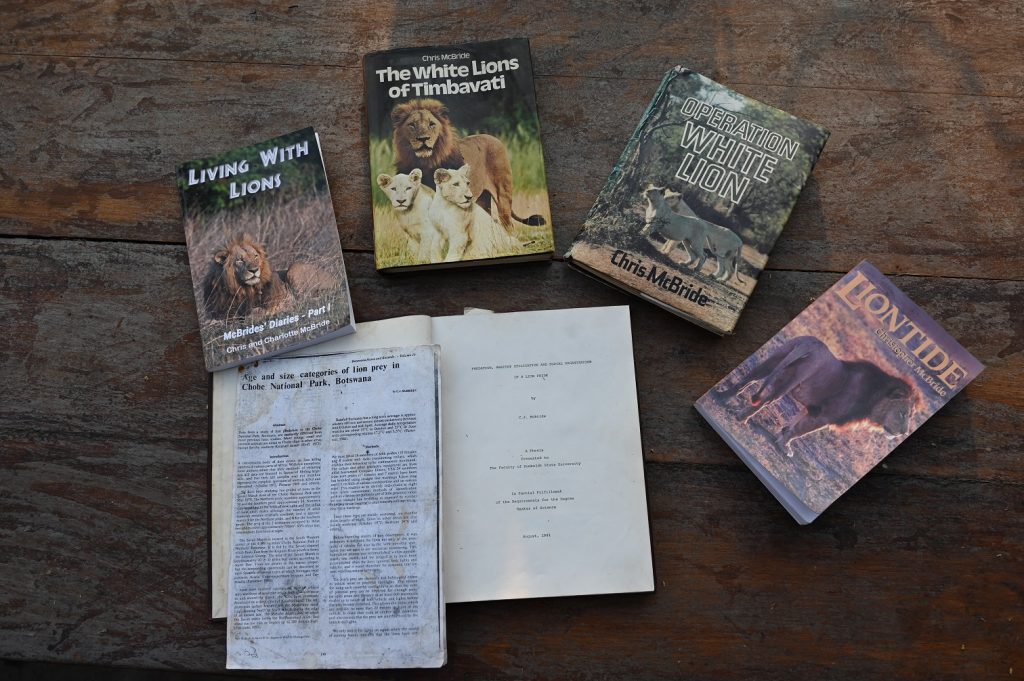 Chris has recently appeared on Animal Planet in a film entitled “White Lions, King of Kings”, and “Missione Natura”, an Italian wildlife programme. He and Charlotte, together with a valued friend in the USA, have nearly completed a book about their experiences at  McBrides’ Camp,  which will soon be published.

While doing his thesis for an Msc degree on lions from the University of California at Humboldt, two white lions were born into the lion pride the McBrides were already watching.

This resulted in a book The White Lions of Timbavati and a Msc. Thesis. The book was translated into eight languages including Dutch, Japanese (Shokagukan), French (Robert Lafont), German (Droemer Knaur), Italian (Rizzoli) and  Finnish. A feature movie was also made.

Chris published another book on nocturnal lion research in Northern Botswana in the late 70’sand early 80’s. A journal article also came out of this.

Both books may be ordered via the Internet.

The White Lions of Timbavati

In this extraordinary place, an oasis in a world of disappearing and endangered species, what appears to be a new strain of lions has suddenly emerged. And for once, man, responsible for the destruction of so much wildlife, is in a position to use a whole battery of new and sophisticated techniques to protect and foster these unique animals – Temba, Tombi and Phuma;  the white lions of Timbavati.

(Order a copy from Ukbookworld)

It takes a rare gift to combine raw scientific data with a personal vision and belief in things natural to produce a captivating narrative. Chris McBride’s book based on his work in the mystical Savuti Channel area of Botswana is such a work. –  Prof. J.  du P Bothma, former head, CENTRE FOR WILDLIFE RESEARCH, UNIVERSITY OF PRETORIA

“A SUBLIMELY WRITTEN BOOK” Massive research and findings. His account of the big cats of the Savuti is totally passionate but beautifully compassionate – Keith Abendroth, THE CITIZEN, 23.7.90.

“PRIDE OF PLACE” This is an invaluable insight into lion behaviour, crammed with information and a book that will have pride of place on the shelf of any naturalist, whether amateur or professional. – John Michell, BUSINESS DAY, 4.6.90.

“A MINE OF NEW DATA” his kill sequences are quite incredible, exquisitely capturing the drama of the hunt. Liontide must rank as one of the most definitive works yet published on the behaviour of the King of Beasts. The book carries a picture gallery of some of the finest photographs I have ever seen of Wildlife in the raw. – Colin Mitchell, Magnum, December 1990.

The 90 full-colour photographs illustrating “Liontide” are of outstanding quality some of them are by far the best photographs of certain aspects of lion behaviour that I have come across.  – Natura, No. 22, December 1990-Feb. 1991.

In this remarkable book Chris McBride, author of the White Lions of Timbavati and Operation White Lion provides a dramatic record of his time with the night hunters of Savuti.

This account of the ceaseless struggle between Africa’s largest carnivore, the lion, and its prey hurtles the reader into the dust- swirled world of the Savuti Lion prides with all its uncertainty and sudden death.

Books may be ordered from AMAZON.

TONY WEAVER, CAPE TIMES, INSIGHT, Friday, August 8, 2008.(Man Friday. Article on McBrides’ Camp, “We could watch the wildlife from a boat, or spend the day just lion about”.

Interview with Chris and Charlotte